Old Time Radio or OTR is a pirate radio station that broadcasts extremely frequently. It is unknown who operates the station, where they are transmitting from or what power level they are transmitting. Broadcasts include no ID or any other identifying information but consist of old time radio shows played with a very long playlist, often including the original commercials. The name "Old Time Radio" has been assigned by the pirate radio/SWL listening community.

They are most often heard on the frequency of 6770 kHz in AM mode. It is presumed they run low power and the fact that they've been transmitting nearly non-stop for several years indicates a likely remote transmitting location. They are often heard on the East Coast of the United States but have been logged on the West Coast and elsewhere.

In terms of time on the air and number of loggings, Old Time Radio is by far the most active shortwave pirate station.

The 6770 kHz frequency choice is a somewhat oddball frequency, as the 43 meter band pirate radio band is often defined as 6800 kHz to 7000 kHz, 6770 kHz is just below this, but above the bottom edge of the 6765 kHz to 7000 kHz fixed/mobile band. 6770 kHz sometimes suffers interference from fixed/mobile users including SHARES and Bangkok Meteo Radio on 6765 kHz USB and 6765.1 kHz USB respectively. QRM from peskies on or nearby 6770.0 kHz is also noted from time to time. However, using 6770 means that the other, more common pirate frequencies, remain clear for other stations.

Pirate radio lore states that OTR is some guy with a bunch of antique radios in a garage somewhere and uses homebrew transmitters to transmit music to them on 6770 kHz and 770 kHz using a very long run of Cat 5 networking cable as the antenna. Power output for 6770 kHz and 770 kHz is unknown. The reliability of this story is somewhat suspect considering the appearance of Old Time Radio on other frequencies besides 6770 AM. 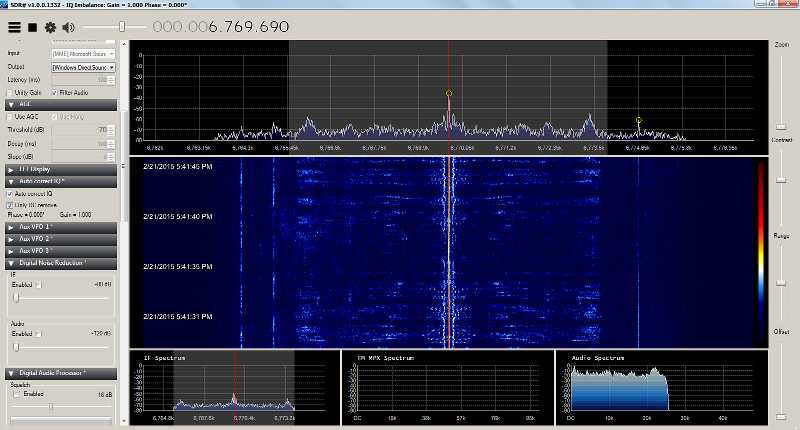