Boomer is generally regarded by pirate radio fans as awesome.

Radio Animal - long known as Boomer to his friends - is perhaps best known as the operator of radio station WKND and for developing the Grenade transmitter, a low power AM transmitter used by several pirate radio operators since the early 1990s.

After a long hiatus from the pirate/free radio scene, Radio Animal resurfaced in August 2010 after a Pittsburgh court rejected his bid to legally change his name to Boomer the Dog, which he sought to reflect his unique fursonality and canine identity. The media spotlight and YouTube videos briefly captured the attention of the internet, although his affable personality seemed to thwart trolls who appeared to lose interest when they couldn't engage Boomer in online flame wars.

In news interviews, on the FRN, on his YouTube channel and elsewhere, Radio Animal has vowed to pursue his bid to legally change his name to Boomer the Dog.

In 2010 Radio Animal's station WKND was among the first stations inducted into the North American Pirate Radio Hall of Fame. 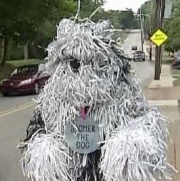