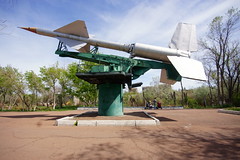 At the beginning of 1956 the Soviet leadership authorized an urgent program for construction of the world's first anti-ballistic missile system - 'System A'. Project manager G B Kisunko at SB-1, who had led the crash program for the first Soviet surface-to-air missile, was put in charge of the project. Subcontractors for the development were designated in February 1956:

Long-range tracking radar (SDO): two variants were to be developed in parallel by V P Sosulnikov and A L Mintsa at the Radiotechnical Institute of the Academy of Sciences of the USSR.

The three guidance radars (RTN), each capable of tracking both an incoming ICBM and outgoing anti-ballistic missile simultaneously: G B Kisunko, with A L Mintsa.

In March 1956 KB-1 completed the draft project for System A. A decree of 17 August 1956 authorized construction of the first anti-ballistic missile site -Area A'. This was to be 250 km from the train station of Sary Shagan near Lake Baikal in the Bet-pak-Dala Desert. Colonel A A Gubako was in charge of the site. Work began on 3 July 1956 and by the beginning of 1957 it was ready for equipment installation. Within three years Area A was in use for trials of dozens of military systems.

The radars required for the anti-ballistic missile systems were 100 times larger than existing surface-to-air missile radars, and generated 10 million times more energy. They required encrypted communications lines between the radar and the guidance system computers. The computers themselves had to be capable of 40,000 operations per second.

In 1958 the anti-ballistic missile tracking station Dunai-2 went into operation on the shores of Lake Baikal. The 1200 km range radar was put into immediate use to track the first test flights of the V-1000, the launchers for which were located at a site 100 km west of Lake Baikal. The three RTN tracking radars were located in the Bet-pak-Dala Desert, in a line 100 to 250 km from the shore of Lake Baikal. These provided the data to triangulate the location of the target to within 5 km at a range of 150 km. The RTN's parabolic antennae had a tracking range of 700 km. Once a target was localized, the V-1000 missile launcher was slewed to the azimuth and angle to the intercept point calculated by the RSVPR. The RTN sent the launch command to the anti-ballistic missile when the incoming warhead reached the intercept position.

On 29 November 1960 the first attempted intercept of an R-5 IRBM by the V-1000 was fully successful. The anti-ballistic missile passed within the kill radius of the high-explosive fragmentation warhead of the V-1000. But the warhead itself had not completed development and was not installed. The five following intercept attempts were unsuccessful - five R-5's and two V-1000's were expended (three times the system failed to launch the anti-ballistic missile in time):

On 8 December 1960 the system didn't function due to the failure of the 6N55 tube of the central computer.

On 10 December there was a failure of the software to recognize the anti-ballistic missile in flight.

On 17 December there was a failure of the receiving unit of the radar at the command point.

On 23 December there was an error of the operator of the long-range radar.

On 30 December a sixth attempt was planned, but the launches of both the R-5 and V-1000 were scrubbed when the long-range radar couldn't come on line.

1961 began with another string of failures (5 further launches were planned in the first test series). A variety of warheads were wasted in attempting to destroy the incoming missiles. Once, manually, and twice, automatically, the missile made a more-or-less successful intercept. But this was followed by three failures, indicating a great amount of time and effort were needed to develop the intercept method.

On 4 March 1961 the V-1000 achieved a world first - the destruction of the re-entry vehicle of an R-12 IRBM. This was followed by the destruction of an R-5 re-entry vehicle. In all, there were 11 launches with military warheads, plus launches of developmental warheads. The S2TA variant used an infrared-homing self-guiding high-explosive warhead and was designed by Storozhenko at the GOI State Optical Institute in Leningrad. It was capable not only of determining the moment for warhead detonation, but also was capable of guiding the anti-ballistic missile independently using an on-board computer. The R2TA version used a radio-guided explosive warhead, with two types of proximity fuses used to determine the correct moment for warhead detonation. These were the G2TA, a radio ranging system, developed by Bondarenko and an optical system, developed by Emdin at GOI. Flight tests of the V-1000 with a nuclear warhead designed at Chelyabinsk-70 were also carried out.