A massive Russian surface-to-air missile. Trials of this long range surface-to-air missile were conducted in 1960-1963 but the project was cancelled after the system failed to down a single target. V-200 missiles were installed in the Dal installations built around Leningrad for the failed missile. In a bit of disinformation, the V-400 was paraded in Moscow, and US intelligence, thinking it was operational, applied the SA-5 designation. The SA-5 code was transferred to the V-200 after the La-400 was cancelled. 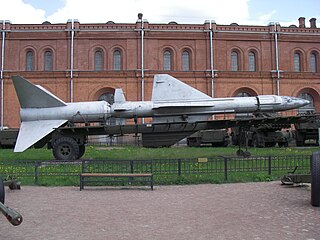 In 1955, after trials of the S-25 anti-aircraft system and its V-300 surface-to-air missile were completed, Lavochkin and V D Kamykov went directly to Khrushchev and proposed urgent development of a long-range surface-to-air missile system to meet the impending threat from supersonic American cruise missiles and bombers. Such aircraft could be over the populated areas and military installations of the Soviet Baltic and Arctic coasts before existing systems could even react. Code-named Dal, the system was to be capable of engaging 10 targets with 10 surface-to-air missile's simultaneously at ranges of 160 to 180 km. This would 6 to 8 times greater range than the S-25. For such a system, radio command guidance from a central control point was not possible. Each missile would have to be self-homing against its assigned target for the terminal flight phase.

Decree 602-364 of 24 March 1955 instructed MAP, MRTP, and MPSS to develop the Dal multi-target system with the capabilities briefed to Khrushchev. The radar and computers of the system were to be capable of detecting targets at ranges of 300 to 400 km, and then directing the missiles to within 12 to 15 km of the targets, after which the missiles' homing systems would conduct the final intercepts. The range of the missile would be 160 km, and they were to be effective at targets at altitudes from 5 to 20 km flying at speeds of from 1000 to 2000 kph.

1. Active radar homing system, A B Sledushkin at NII-17 MRTP,

OKB-301 Deputy Director M M Pashimin led the team developing the V-400 surface-to-air missile. The V-400 was to be a two-stage rocket with the index 5V11. The rocket itself was to be theoretically capable of intercepting targets flying between 1500 and 3000 kph at altitudes from 5 to 30 km. Development had begun at the beginning of 1955, even before the decree was issued. The Soviet Ministers established the final TTT specification for the system on 17 August 1956 in decree 1148-581. However due to the high level of technical innovation, the draft project was not completed until April 1957. Two variants were proposed, consisting of either two liquid propellant rocket stages, or a rocket booster with a ramjet second stage. Isayev designed the three-chamber booster engine for either design. During trials an alternate solid booster was also tested, which had a shorter burn time and no control of thrust during the boost. This was the PRD-70 designed by I I Kartukov at KB-2 Factory 81.

The rocket-propelled cruise stage engine was the R01-154, which was pump fed and could be throttled from 600 to 6000 kgf. It was designed by S A Kosberg at OKB-154 using his chamber R01-01A (the actual engine used in the prototype rocket was the Isayev S2.713.0400-0. This and follow-on modifications were developed in collaboration between Isayev and Kosberg).

The Zenit baseline active radar homing system for the missile was developed by G M Kunyosiky at NII-17 GKRE, and the competing Raduga design by A B Slepushkin. The latter had a range of 12 to 16 km. The Grif distance ranger developed at NII-504 guided the missile until it was near the target, where the active radar would take over.

The four stabilizers on the boost and cruise stages were not indexed in line, but at 45 degrees to each other (x and +). The missile used a standard guidance program during the boost phase. After jettison of the booster stage, the SAZO SPK guidance system (developed by NII-33 GRU) received radio commands from the ground and translated them to the AP-69B autopilot developed by OKB-923.

The rocket variant had a launch mass of 8757 kg and a length of 13.6 m. The ramjet version had a length of 14.2 m. Both had a wingspan of 2.7 m and a cruise stage diameter of 650 mm. The solid booster stage had an 800 mm diameter. Although 77 rockets were fired during trials, the planned production schedule slipped due to numerous difficulties encountered during testing. Although the initial research work was completed at OKB-301 in mid-1956, it was not until the decree 735-358 of 4 April 1958 that the first schedule for the trials of all system elements working together was established - for the first quarter of 1960. These would take at Area 35 of Area A, 70 to 80 km west of Lake Baikal near Sary Shagan.

The first automated missile launch took place on 30 December 1958. There were 12 launches during 1959, all basically successful, but all with problems of one kind or another. Rockets were being produced at the factory, but without the SAZO (system of active interrogating data link), the associated ground system of command hardware (SPK), or the autopilots. Not a single homing head had been completed. At the beginning of 1960 a special joint committee was formed by MAP and MREP to identify the development and production bottlenecks and find solutions. A May 1960 decree set up a state commission tasked to accelerate the development program. This produced results and in May 1960 the first guided launch was finally made against an aerial target.

During these tests the missiles would be tracked with a cinetheodolite to verify that the rocket was being commanded to within homing range of the warhead. If this could be accomplished, it was felt, successful destruction of the target was almost guaranteed. On 9 June 1960 Lavochkin died unexpectedly and M M Pashinin became Chief Designer of the bureau. Pashinin lacked the standing and authority of Lavochkin, and the fortunes and finances of the bureau rapidly declined. A few specialists from OKB-301 managed to complete four launches of the surface-to-air missile in 1960 with the Zenit-1 homing system, but only two of these reached their target. The planned state trials of the missile, planned for October 1960, were cancelled pending further development tests.

18 launches were made of the V-400 in 1961. Three of these were tests where the warhead-tipped missile was manually guided by test operators to the vicinity of the target, and then allowed to home in on realistic targets. These included a parachute-borne target, a MiG-15 drone, and an Il-28 light bomber drone. The parachute target and the Il-28 were destroyed.

By the end of 1962, a total of 57 launches had been made. Factory 82 had planned to complete 30 production rockets in 1961. But due to continued problems with development, all of these had to be scrapped. In parallel construction of the fixed Dal system was begun around Leningrad. But the electronics components of the system were still not mature and the first all-up avionics tests were not conducted until 1962. Even then the first all-up test against an Il-28 was unsuccessful. It seemed the on-board electronics were simply not up to the automatic homing task.

But Dal was too important to the defense of the Soviet Union to cancel. A decree of 4 July 1959 had called for development of the Dal-M system with the V-420 rocket and the Dal-2 with the V-500 rocket. These were to have a radar range of 500 to 600 km, and a missile range of 300 to 400 km against an Il-28 target. A new Raduga homing system would be developed by NII-17 for these missiles. Again alternate cruise stages were planned, either a Bondaryuk ramjet-powered stage or a solid propellant stage powered by a motor by OKB-16 Zuba. The requirement was that a 4000 kph target would have an 80 to 85% probability of being shot down at altitudes from 200 m up to 30 km. Planned trials of the alternate versions of the missile were to be conducted in 1962, of the complete missile system, in 1962, and the all-up missile, including warhead and tracking radars, by the second quarter of 1964.

In contrast to these plans, by 22 October 1962 not a single successful test of the complete basic Dal system had been accomplished. All hardware development was ordered stopped and the V-400 was reduced to a 'paper' missile. The entire project was cancelled in December 1963 and the sites already built around Leningrad were completed with the S-200 system. Throughout the long and costly development of the V-400, not a single target had been shot down in a test of the complete system. The missile concept was just too far ahead of existing Soviet electronics capabilities at the time it started, and during its long development it was overtaken by the S-200, which started later and finished earlier. This was a common situation for other missile projects of the period, in both east and west.