The Korean language numbers station V24 is believed to originate from South Korea, although this has never been confirmed and the exact transmitter location is unknown…at least unknown to anyone who is talking about V24. V24 has been observed transmitting since the very late 1990’s, with numbers stations being in use from South Korea at least as far back as the early 70’s. North Korea at one time used numbers stations also, but the current popular belief is that the North ceased numbers operations around 2000.

Of interest, while looking at my old 4th edition (1979 printing) of "The Confidential Frequncy List" I found an entry for 5715 kHz. The notation said "NUMBERS in KK". I think that is a fairly strong indication that V24 has been around for three decades or more. Now if I can just locate my 1st or 2nd edition of that list.

V24 is not as often reported as some other numbers stations, such as E10, V02a, or M8a. This is likely caused by several factors.

While the station has been monitored World wide, some areas have a better chance of intercept than others. Many (but certainly not all) hobbiest who monitor numbers transmissions seem to be congregated in either Europe or North America. Given V24’s most well known transmission times and frequencies propagation is not favorable into either Europe or Eastern North America.

Western North America has a better probability of being able to hear the transmissions and the far West coast of North America has the best potential path of the mentioned locations. Japan and Australia have excellent paths and the station has been reported there with great success, however Australia seems to have only a few numbers station monitors and Japan may have a substantial number but because of the language barrier reports there may not often be shared outside of the country.

Two other frequencies, 5500 and 6715 kHz, are sometimes listed, but I can find no recent (past several years) reports on those frequencies.

5115, 5715, and 6215 are the most reported, but it is very possible that this weighting is a result of favorable conditions to reporting stations on those frequencies, it is quite possible that a monitor near Korea may find the other frequencies quite active.

The 6330 kHz frequency was first seen on February 12, 2010. However, so far all intercepts on that frequency have slotted into existing "blanks" in the schedule. This may be a new freq, but to me it looks most likely as if it has been around for a while but never reported.

The 4900 kHz frequency has only recently been reported, and only a few times. But it was not found by accident. A user (JSA) in the #swl channel noted that he had logged a KK, YL, 5f transmission on 4900 in early 2004. I watched the freq for a couple weeks and sure enough, I did copy a V24 transmission. So far, after a solid month of watching, I have only received 4 transmissions on 4900 kHz.

Transmission times as reported are between 1200 and 1620 UTC, occurring on the half hour or the hour with the exception of a notable time slot at 1620 UTC on a few days a month. Again, it is very possible V24 is using other time periods but propagation might be biasing the perceived schedule. The recently reported/added frequency of 6730 kHz also has (one time) been reported at an odd time period, with a 1445 start time. Assuming this was not an error in reporting this might be the only reported departure from the XX00, XX30, and 1620 start times.

The V24 transmission schedule is not fully understood at this time. On a given day there may be no transmissions or as many as five may be observed in the 1200-1620 UTC window.

Transmissions seem to be tied to calendar days and specific day/time/frequency slots and are repeated two days in a row. 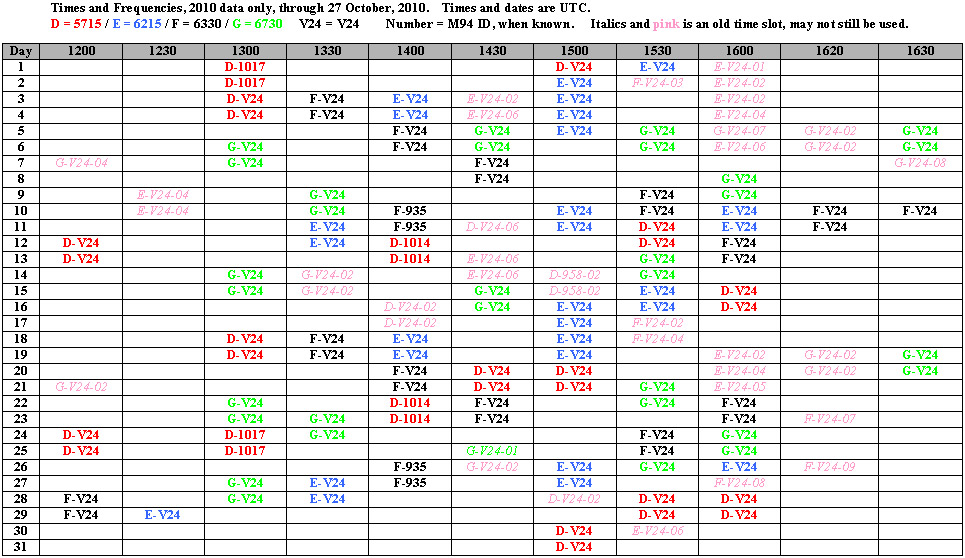 1. The carrier comes up on frequency well before the anticipated transmission window. Observed times have ranged from under 2 minutes to over 12 minutes before audio commences, with the most common being about 5 minutes before.

2. The audio generally starts 2 to 6 seconds after the scheduled time with a musical lead-in (top or bottom of the hour, such as 1300 or 1330, or the odd 1620 time slot). V24 is sometimes described as starting with “Korean Folk music”, but that description might be dated. The music during recent intercepts (1st half of 2009) has been varied, from choir to near pop, but the music so far identified by title or performer has indeed all been North Korean. Two songs regularly used by V24 that have been identified as North Korean and examples found on the Web are Pangapsumnida “Pleased to meet you” [1] and used by V24 here [2] and Whistle Hwi-pa-ram Kuchibue “Whistle Song” [3] and used by V24 here [4]. To date I have never heard the Whistle song used on 6215 kHz but I have heard Pangapsumnida used on multiple frequencies. The length of the musical lead-in varies by song, times from one minute to four minutes have been seen. A given song title seems to always be the same length, but different titles are different lengths.

3. After the music completes a female voice starts in Korean. It is always the same voice with the same inflictions. The voice might, or might not, be synthetic, but it is at least computer stored and recalled. The computer used seems to run Windows, probably XP, as several times computer warning sounds and restart sounds have been heard when the station is having technical difficulties. These difficulties do happen, but not anything like as common as seen on V02a/M08a/SK01.

The female voice first announces the ID of the recipient unit and the message length. There is some disagreement on the exact format of this announcement (different translators have worded it differently even when translating the same recording). The format is roughly this: “For number XXXX, for number XXXX. Please receive message length YY. Information.” [5]. XXXX is the three or four digit recipient ID, although I have been told it is not always a number, sometimes it is a name. YY is the word count of the message to follow.

4. The Korean female voice then starts sending the message groups. For a given transmission all groups are the same length, either 5 or 4 numbers each. It also appears that the group length is fixed with relationship to the day/freq/time slot. If on the 19th of the month on 6215 kHz at 1400 UTC you hear 4 figure groups then next month on the same day, same freq, same time you will also hear 4 figure groups. 5 figure groups are initially sent in a “3/2” format. This means that the first three numbers of each group are sent and there is a slight pause and the last two numbers of the group are sent. 4 figure groups are initially sent in “2/2” format, the first two digits are sent, there is a slight pause, and the remaining two digits of the group are sent.

5. After the preannounced number of groups are sent the Korean female voice then says “I’ll send the message again” [6]. And the 4 or 5 figure groups from the first half are repeated.

7. After the last group is sent the Korean female voice says "That is all, thank you" [7]. There is no audio after this point.

8. The carrier normally stays up less than one minute after the last audio, but occasionally will stay up longer. If it is the last transmission of the day you might hear the PC shutdown sound before the carrier drops, I have heard it about twice a month on average.

And that pretty much wraps up the V24 as I know it today.

Some audio files of V24

There is an MCW transmission that shows up on some of the same frequencies as V24, so far never seen on 6215 or 6730 kHz. This AM MCW transmission is very probably associated with V24 and until recently had no ID, it was carried as "UnID MCW". It now carries the designator M94.