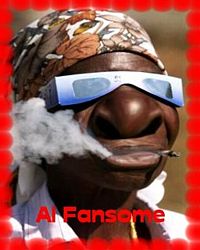 Al Fansome is a pirate radio listener who lives in a trailer. Al frequently posts to the FRN and HF Underpants, and also is a regular on #pirateradio. He needs frequent reminders to check his tire pressure, but often has difficulty with the task. Al will occasionally post requests on the FRN, soliciting advice on best tire pressure practices. Some of the advice he gets is good, some not so good.

Fansome is frequently singled out for particular ridicule by pirates; for example, in September 2007, Commander Bunny called for the establishment of a Fansome-free zone.

It was widely reported that Al had died in January 2011, but this has not been independently confirmed. In fact, the reports are seemingly contradicted by Al's continued presence on IRC networks.

Fansome has participated in several musical projects. Bootleg copies of his first album, long out of print, circulate among deranged audio collectors.

In September 2008 a bootleg copy of Fansome's first album in two decades was obtained through sources in the FRN. A comeback album, "Bajada," returned to familiar themes of heartache, broken antennas and soil erosion. Bajada was released on RamaKwanzaHannuChristmas 2008 and quickly faded into obscurity.

A rare copy of "Ventilador Alluvial", Al Fansome's collaboration with legendary Syd Barrett, can be obtained in exchange for a small fortune in angora pelts. Repeated listening of this album under the influence of LSD reportedly inspired Belinda Carlisle to launch a 10-year stalking campaign of Fansome throughout South America and China.