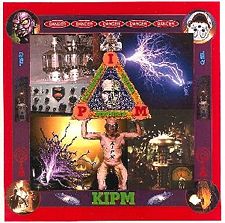 One show, for example, depicted aliens making murderous contact with humanity at the Arecibo radio telescope in Puerto Rico, portending an alien invasion. This show actually started a small panic in the ham radio community, among those who were not familiar with KIPM; several called in to Art Bells's show trying to find out what was really happening. KIPM's shows often aired nonstop for an entire weekend, stopping only to change frequencies.

KIPM was also known for spectacular QSLs. They usually featured glossy, full-colored, surrealistic original artwork on large sheets of excellent quality paper. Originally, KIPM QSLed from Lula, Georgia; this was a maildrop associated with Radio Bob's Communication Network. Maxwell later switched to Elkhorn, Nebraska. KIPM's programs are often relayed, and mention these drops; however, they are both closed, and it seems that KIPM is not replying to QSL requests at this time.

Although no longer producing new shows, Alan Maxwell still posts occasionally on the FRN, and he may still be reachable at kipm_outerlimits@hotmail.com. Despite entreaties by his fans, he has not returned to the airwaves; recently, though (mid-2007), he did apparently post a message to the Free Radio Weekly saying that a return may be in the works.