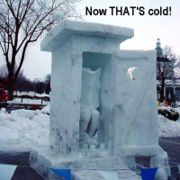 A shortwave radio pirate station first logged in 2008, Outhouse Radio was particularly active in 2009 on and around the popular 6925 kHz frequency. On air and via signal report confirmations the operator reported testing several rigs, including military surplus transmitters, in several modes, as well as a rig uncommon to the U.S.: a CB transverter from Zamin in Brazil. (See also this log for background.)

Outhouse Radio broadcasts have ranged from varied musical selections to relays of other stations including Radio First Termer - Iraq in 2009, as well as relays of the Pirates Week podcast. Many broadcasts were accompanied by SSTV including a confirmation that Outhouse Radio had also transmitted SSTV identified as "UN?D Radio", a humorous poke at DXers who often log unidentified or unidentifiable stations as "UNID".