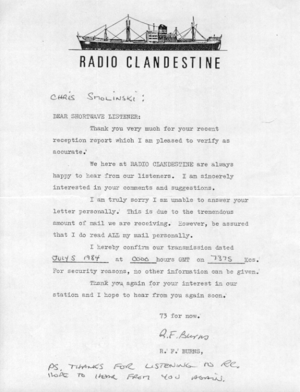 Radio Clandestine was a popular pirate radio station active from the early 1970s until the 1990s. The station was hosted by R. F. Burns and featured music and fake announcements for products like "Industrial Strength Baby Cleaner" and "Marijuana Helper." Other characters appearing on Radio Clandestine included Chief Engineer Boris Fignutsky, Secretary Wanda Lust, and Drewell the Cabin Boy. The station was noted for high powered operation and professional production quality.

Stations relaying recordings of old Radio Clandestine shows have been logged as recently as 2006 and 2007 at the SWL Winterfest, and in 2010 by WEAK.

In 2010 Radio Clandestine was among the first stations inducted into the North American Pirate Radio Hall of Fame.

According to various sources, the voice of R.F. Burns of Radio Clandestine, Christopher Lowell Murdock (WA1HOD), died at his home in Maine in February 2012 at the age of 59.