A Soviet-era Russian surface-to-air missile. Enormous surface-to-air missile developed by the famous missile scientist P D Grushin after the failure of the Dal project. Deployed in limited numbers and exported to countries in the Mideast to defend against American high-altitude, high-speed SR-71 reconnaissance aircraft. 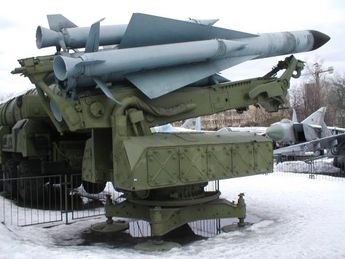 The S-200 surface-to-air missile system was designed for the defense of the most important administrative, industrial and military installations from all types of air attack. The S-200 was built for use against almost any kind of enemy aircraft, including air command and control centers, AWACS aircraft, aircraft jamming creation and other manned and unmanned aerial vehicles. The S-200 is an all-weather system that can be operated in various climatic conditions.

Soon after the V-400 Dal/SA-5 Griffon program's failure, P D Grushin's team developed the 5V21 missile for the S-200 Angara surface-to-air missile system. This had a range of over 150 km and incorporated several new principles. It was equipped with the first semi-active radar homing head. The aerodynamic surfaces automatically adjusted according to the velocity and altitude of the rocket. The missile system had one missile per launcher.

By 1966, the S-200 was officially accepted into service in order to replace the failed anti-ballistic missile RZ-25/5V11 "Dal". The Dal was assigned the NATO reporting name SA-5 "Griffon" before it was cancelled.

In the Mideast, this missile successfully intercepted Israeli reconnaissance aircraft at a range of 190 km in the 1980's. This performance was unmatched in the world. The missile was used as the booster for the experimental Kholod hypersonic scramjet. Two launches of this were made on 28 November 1991 and 17 November 1992 as part of an experimental program run by TsIAM.

However, the S-200 hasn't fared well against modern Israeli aircraft. During the brief clash between the Israeli Air Force, Syrian Air Defense Force, and Iranian forces on February 2018, Israeli jets successfully destroyed several S-200 batteries without any losses. The Syrian A.D.F. claimed one aircraft shot down, the Israelis surprisingly admitted one loss.

A Russian Il-20 Electronic Intelligence plane was later shot down accidentally by a Syrian S-200.

The missile's minimum range of 60 km is due to the booster burn time and jettison requirements, limiting the system to engagements against relatively large unmaneuverable targets at ranges up to 250 km. Guidance beyond the 60 km booster jettison point is by course correction command signals from the SQUARE PAIR radar with the S-200's own active radar terminal homing seeker head activated near the projected intercept point for final guidance.

The large HE warhead is detonated either by a command signal or the onboard proximity fusing system. When fitted with a nuclear warhead only the command detonation option is used.