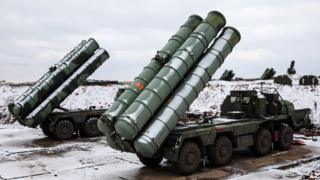 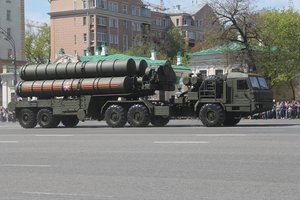 Development of the S-400 system began in the late 1980s, and the system was announced by the Russian Air Force in January 1993. On 12 February 1999 the first, reportedly-successful tests were performed at Kapustin Yar in Astrakhan, and the S-400 was scheduled for deployment by the Russian army in 2001.

In 2003, it became apparent that the system was not ready for deployment. In August, two high-ranking military officials expressed concern that the S-400 was being tested with "obsolete" interceptors from the S-300P system and concluded that it was not ready for deployment. Completion of the project was announced in February 2004, and in April a ballistic missile was successfully intercepted in a test of the upgraded 48N6DM missile. In 2007, the system was approved for service. Russia has accepted for service the 40N6 long-range missile for the S-400 air defence system, a source in the domestic defense industry told TASS news agency in October 2018.

S-400 Triumf and the Pantsir short-range missile system can be integrated into a two-layer defense system.

The S-400 featured an unbreakable, unjammable data link from the launcher to the missile in flight. The system consisted of the 48N6E long-range and 9M96 short-range rocket, a multi-target radar, a launcher, and autonomous observation and tracking vehicles. The S-400 was capable of simultaneously tracking and guiding missiles to 12 targets. One SPU launcher had four missile containers; each container could house one 48N6E or four 9M96 surface-to-air missiles. These missiles were not just capable against airborne targets, but also radar stations, command points, strategic bunkers, and re-entry vehicles of intermediate range missies with velocities of up to 4.6 km/s.

The system featured a second launcher with midrange missiles, developed by MKB Fakel, which also would serve as the missile for the naval version of the system. These were capable against aircraft, several types of ballistic missiles, and provided echelon defense of military units.

The standard launcher had four missiles and could be mounted on heavy chassis of MAZ or KRAZ types. The smaller launcher could be mounted on 3-axle KAMAZ chassis. A typical battery would consist of three launchers, and vehicles with the modular guidance and velocity measurement systems. A single SU consisted of a phased array radar. The radar was carried horizontally for transport, then raised vertically when in use.

The missile was guided by an on-board inertial navigation unit with radio command during the cruise phase, and active radar homing in the final approach to the target. The small-dimension missiles used the universal 9M96E and 9M96E2 rockets developed by MKB Fakel. The system was planned for use by both the VVS and VMF. The missile was cold-launched vertically from the launcher, only igniting and arcing over toward the target when clear of the vehicle. The Triumf had an increased zone of military usefulness compared to second or third generation missiles, and featured use of new mathematical techniques and computer equipment.