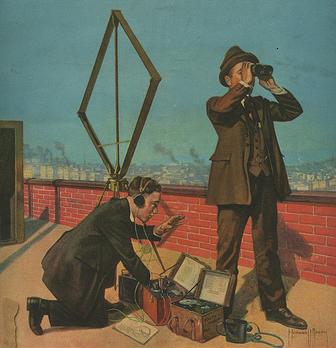 In the 1960s, when the Cold War was in its peak and the USA and Soviet Union were rushing to put the first man into space, two Italian brothers and amateur radio operators, Achille and Gian Judica-Cordiglia, created their own radio listening post outside of Turin to try to get a peek into the Superpowers' space race. The story of these two brothers takes surprising twists and turns that give the best Hollywood thriller a run for its money, including controversial claims to have listened in on Soviet secret space missions that never were mentioned to the public.

The Judica-Cordiglia brothers started out tuning in on Sputnik, and soon were recording anything that was being put into space. They heard signs of life from Sputnik 2, with Laika the dog. They heard the United State's first satellite, Explorer 1. Things started to become very interesting when in November 1960, they heard an SOS signal that faded, as if it was falling away from the Earth. In February 1961, they claim to have heard the heartbeat and labored breathing of a human suffocating. Two days later, the USSR announced that they sent a space capsule the size of a large bus into space that had burned upon re-entry, but never mentioned a passenger.

The brothers kept pace with the space race, recording Yuri Gagarin's famous mission in April 1961. Then, in May of 1961, they made two chilling recordings that might represent evidence that the USSR sent other cosmonauts into space that never returned to Earth. First, they heard the voice of a female cosmonaut who they claim died upon re-entry [1]. Two days later, they heard a few seconds of another distressed call for help from space, reportedly from two men and a woman. The recordings are hotly contested to this day.

This is just the start of their adventure. They recorded the spaceflight of John Glenn on a frequency kept secret by NASA. They may have narrowly escaped assassination by the KGB after attracting the attention of the Italian SIFA counter-intelligence agency and the KGB. They knew too much about the Soviet space program and had become too public with their findings. Their publicity saved them, though, when they attracted the attention of an Italian TV trivia show, where they won an all-expenses paid trip to NASA. They impressed the NASA engineers with their recordings of Glenn in space, whose frequency was never publicized. After returning from their trip to the States, they were flooded with publicity. They continued to record space mission radio transmissions, capturing the first woman in space and the first spacewalk. They even went on to found Italy's first cable TV network!

Could the brothers have heard the first human in space, two months before Yuri Gagarin? Did they hear genuine distress signals from cosmonauts whose very existence was covered up? They maintain to this day that all of their recordings are genuine. There is proven evidence that the Soviet Union covered up important disasters and embarrassments to avoid public disapproval. One cosmonaut trainee was banished from the space program after getting into a bar fight. His image was removed from a famous picture of the Soviet cosmonaut team. Cosmonaut Vladimir Komarov died in a re-entry crash on the Soyuz 1 due to a design fault. The Soviets reported it as a simple parachute failure to cover up the shoddy design. It's very plausible that the USSR covered up its failures to avoid international embarrassment.

Even if the recordings of the female cosmonaut and others were fabricated to supply news to the media, the rest of the Judica-Cordiglia brother's story is fascinating. They constructed one of the biggest, most capable amateur radio listening posts in an abandoned WWII bunker outside of Turin. They even found partners to create a listening post network they called 'Zeus'. Even if their claims prove to not be fully true, their story is a fascinating example of how amateur radio can follow history.