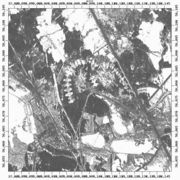 UVB-76, (Now "ANVF", formerly "MDZhB" and "ZhUOZ") is the callsign of a HF radio station that usually broadcasts on the frequency 4625 kHz on a USB (Upper Side Band) signal. It is known among radio listeners by the nickname The Buzzer. It features a short, monotonous buzz tone, repeating at a rate of approximately 25 tones per minute, for 24 hours per day. The station has been observed since around 1982.[1]. Until 2010, most voice transmissions in the Russian Monolit code signal were rare.

The station transmits a buzzing sound that lasts 0.8 seconds, pausing for 1–1.3 seconds, and repeating 21–34 times per minute.[1] One minute before the hour, the repeating tone is replaced by a continuous tone, which continues for one minute until the short repeating buzz resumes. Between 07:00 and 07:50 GMT the station transmits using lower power, when transmitter maintenance apparently takes place.

The Buzzer has apparently been broadcasting since at least 1982 [1] as a repeating two-second pip, changing to a buzzer in early 1990.[2] [3] It briefly changed to a higher tone of longer duration (approximately 20 tones per minute) on January 16, 2003, although it has since reverted to the previous tone pattern.[4]

It is believed that the buzzer is not directly modulated but actually recorded by a active microphone, as there have been reports of hearing background chatter while the buzzer was on.

Frequently, distant conversations and other background noises can be heard behind the buzzer: this suggests that the buzzing device is behind a live and constantly open microphone (rather than a recording or automated sound being fed through playback equipment) or that a microphone may have been turned on accidentally. One such occasion was on November 3, 2001, when a conversation in Russian was heard:[1] "Я — 143. Не получаю генератор." "Идёт такая работа от аппаратной." ("I am 143. Not receiving the generator (oscillator)." "There's some work on the hardware.")

UVB-76 has become much more active as of 2010. In early June, many listeners also report that it simply stopped transmitting, although transmission resumed by June 6th, 2010. That same day, many listeners reported transmissions in Morse Code. Since the start of June 2010, the normal buzzing sound from UVB-76 has been replaced by a continuous high pitched noise, similar to that of a modem, with intermittent deeper tones like that of a foghorn.[5] Whether this is a malfunction or an intended change to the buzzing remains to be seen. On June 10, UVB-76 reportedly transmitted actual polytone data bursts followed by another Morse Code transmission. Several conflicting amateur reports on UVB-76's recent activities also date from June 2010.[6]

Voice messages from UVB-76 were very rare, until 2010. There are six well-known recordings:

The station uses Molniya-2M (PKM-15) and Molniya-3 (PKM-20) transmitters and a Viaz-M2 backup transmitter. The transmitter power is approximately 10 kW and backup power is 2.5 kW, which is used from 7:00 to 7.50 UTC. The antenna model is a horizontal dipole VGDSh (Nadenenko), height approximately 20 m.

The station's transmitter was located just outside Povarovo, Russia at 56°4′58″N 37°5′22″E, which is about halfway between Zelenograd and Solnechnogorsk and 40 km northwest of Moscow, near the village of Lozhki. The location and callsign were unknown until the first voice broadcast of 1997.

In September of 2010, the station was evacuated, the station transmitter was moved to the nearby city of Saint Petersburg, near the village of Kerro Massiv. This may have been due to a reorganization of the Russian military. Prior to August 9, 2015, the station is not transmitted from the Kerro Massiv transmitter site ("Irtysh") anymore, possibly due to a reorganization of the Russian military for the particular area which may cause the frequency to be used only in the Moscow Military District. At present, The Buzzer appears to be broadcast only from the 69th Communication Hub in Naro Fominsk, Moscow.

Its purpose is unknown. One website claims the station is meant to "Transmit orders to the military units and recruitment centers of the Moscow military district." This is unconfirmed, and unlikely considering the station transmitted the simple buzz tone for at least 15 years before any words or numbers were broadcast. Because of the nature of the broadcast and the fact that its transmitter location is rumored to be a communications hub of the General Staff of the army,[10] UVB-76 is widely believed to be used to transmit encoded messages to spies, as is generally assumed for the many numbers stations that populate shortwave frequencies. Transmitter sites for some numbers stations have been triangulated to military and/or intelligence installations in several countries, although no nation's government will confirm or deny the existence of the stations or their purpose. Another possibility is that the constant transmission of its characteristic sound is supposed to signal the availability, operation or alertness of some kind of installation, a kind of dead man's switch of a military or other installation, possibly for the Russian Dead Hand system.

Another explanation for the constant buzzer is the High-frequency Doppler method for ionosphere research [11] described in the Russian Journal of Earth Sciences, in which radio waves are reflected from ionosphere inhomogeneities. Changes of an ionosphere state can be caused by solar geophysical or seismic events. This method involves comparing a continuous radio transmission which is reflected by the ionosphere with a stable basic generator. The continuously transmitted carrier frequency currently used for this research matches that of the Russian Buzzer (4.625 MHz).