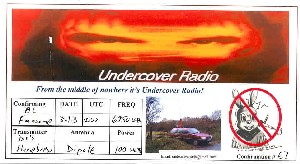 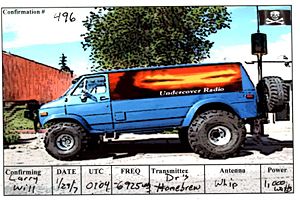 Undercover Radio QSL, 2007.
Undercover Radio is a pirate station that broadcasts original paranormal stories, as told in the first person by an announcer named Doctor Benway.

Between stories, Doctor Benway plays ethereal and ambient electronic music. Benway occasionally breaks from his paranormal material to talk about his long and varied history in the pirate radio scene. Undercover Radio prefers to broadcast in AM, around popular frequencies such as 6925 KHz and on occasion, 1710 KHz in the MW band.

Benway occasionally begins his broadcasts with live talking while adjusting his transmitting equipment; generally the show itself is pre-recorded. Doctor Benway also states that many (if not all?) of his broadcasts are made from remote locations, possibly campsites.