Radio Free Oz, the Voice of Oz, was active in the late 80s and early 90s. This international voice from "far, far away" was managed by Howard E. Lyon, Gen. Mgr and chief on-air personality. His questionably able assistant and news reader, Nerdly Listlogger, was generally abused frequently by Mr. Lyon. Broadcasts were effected from Broadcast House, Tune Town, OZ.

News reports detailed daily activities in the Emerald Kingdom, actions of the Ozian Bundestag, and Emerald City defensive strategems such as the use of "Holy Water cannons" employed in witch control. A frequent sponsor was Dunkin Munchkins. "Munchkin fingers,... they're delicious!"

Agents of the FCC claimed to have monitored transmission on 3/29/1990 around 1915 local time, and a few days later paid a visit to the purported operator. At that time, the Voice of Oz had been rated #6 on the FCC's 10 Most Wanted list, according to reports sent to the operator.

The accused operator was issued a $1000.00 NAL, to which he responded that this arbitrary assessment was ludicrously overstated, and that the fine should not be more than $100.00. A personal check in the amount of $50.00 marked "Paid in Full" was submitted to the local Field Office. This check was subsequently returned, and a discounted fine of $500.00 was unilaterally returned to $1000.00.

A few months later the operator received a telephone call from an Asst. Federal Attorney seeking payment of the fine. During the discussion, he stated that this was not even worth his time to collect a grand. The operator then told him that, if such was the case, he should then "drop it"!

No further collection efforts were ever pursued.

Not much is known about the Voice of Oz except that it was active in the early 1990's. The QSL below was actually sent to another operator as a reception report. 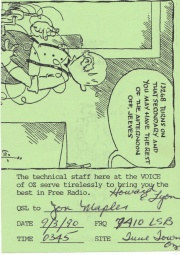