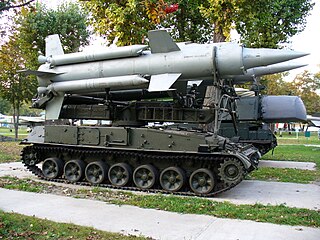 Preliminary work on the concept used the artillery-launched KRI flying shell (a flying laboratory used to develop ramjets and surface-to-air missiles by Bondaryuk in the mid-1950's). This eventually evolved into the 2K11 Krug surface-to-air missile. Development into an operational system was authorized by decree 188-88 of 13 February 1958. NII-20 GKRE (later NIEMI, later Antey) was prime contractor, under the management of Chief Designer V P Efremov. The 1S12 observation and targeting system was developed by V V Raizberg at NII-208 GKRE (later NIIIP); the 1S32 guidance system by I M Drize at NII-20 GKRE; the 2P24 launcher and 3M8 surface-to-air missile by L V Lyulev at OKB-8 GKAT (later EMKB Novator named for L V Lyulev); the self-propelled launcher was developed by General Designer A I Autonomov at the Kharkov Machine Works named for V A Malyshev. OKB-8 GKAT occupied a single industrial area within the OAO M I Kalinin Machine Works.

The missile had a two-stage aerodynamic layout with the cruciform wings of each stage at 45 degrees to each other. The wings and stabilizers were lightweight and easily removable for transport of the missile. The rocket was accelerated to ramjet ignition speed by four solid booster rockets. There were two surface-to-air missiles per launcher. The launcher itself was in contact with the guidance station by a radio data link; the missiles talked back over the link, indicating their readiness for launch.

The missile took six years to develop, including development of the 3Ts4 Bondaryuk ramjet, which operated on kerosene. The chief difficulty was that the ramjet only operated well at low angles of attack. Any abrupt maneuver would cause a reduction in thrust or even flameout. Solving this was an enormous challenge. In early tests the missile would become uncontrollable as soon as the first guidance command was received. The electronics aboard the missile were also not adequately shock- and vibration- resistant at first. There were also problems with arrangement of the guidance antennae, which would become masked as the missile maneuvered, also causing it to go out of control.

All of these problems were eventually overcome, and the Krug was accepted for PVO service in 1964.

It takes 5 minutes from arrival at a new location to launch readiness; 5 minutes required to depart in 'shoot and scoot' mode. Two missiles per launcher.