The Pip is the nickname given by radio listeners to a shortwave radio station that broadcasts on the frequency 5448 kHz by day, and 3756 kHz during the night. It broadcasts short, repeated beeps at a rate of around 50 per minute, for 24 hours per day. The beep signal is occasionally interrupted for voice messages in Russian. The Pip has been active since around 1986, when its distinctive beeping sound was first recorded by listeners.

The station is commonly referred to as "The Pip" among English-speaking radio listeners. In Russia, it is known as Капля (Kaplya) "the drop". While its official name or callsign is not known, some of the voice transmissions begin with the code 8S1Shch (Cyrillic: 8С1Щ), which is generally considered to be the name of the station. However, this code may not be a callsign, but instead serve some other purpose. Radioscanner.ru identifies the owner of this station as a North-Caucasian military district communication center with callsign "Akacia" (ex-72nd communication center, Russian "72 узел связи штаба СКВО") 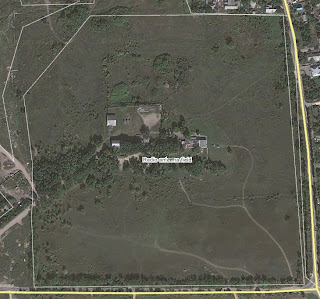 (Reported location of 8S1Shch, near Rostov on Don, Russia)

The station's format resembles, in many ways, that of its presumed sister station, The Buzzer. Its signal consists of short beeping sounds that repeat at a rate of approximately 50 beeps per minute. It is transmitted on the frequency 5448 kHz during the day and 3756 kHz at night. The times at which the station switches from the day to the night frequency or vice versa are changed over the course of the year, presumably to match the changing lengths of day and night. Higher frequencies have better propagation characteristics during the day, while lower frequencies do better in darkness.

Voice messages As with The Buzzer, the beeps are sometimes interrupted for the transmission of coded voice messages. There are two different message formats. Messages beginning with the Russian word для (dlya, "for") are thought to be test messages to gauge reception quality. The message itself consists of ten callsigns, each consisting of four numbers or letters. For example:

Purpose The purpose of The Pip is not known, although there are many hypotheses. It is often suggested that The Pip is part of a larger radio relay or control system, which also includes The Buzzer and The Squeaky Wheel, which both follow similar formats. In particular, activity on The Pip often used to be followed a few minutes later by a voice message on The Squeaky Wheel, suggesting that both are operated by the same organization and share the same purpose. On one occasion, The Pip's characteristic beeping sound could be heard in the background while a message was being transmitted on the Squeaky Wheel's frequency, which may indicate that both stations are even operated from within the same building or room. However, these activities have since ceased. Later tables of received messages no longer show such parallels.

(All facts courtesy of Wikipedia and Priyom.org)