Another telemetry beacon that broadcasts on 4095.70 and has been logged widely on the West Coast, up into Canada, as far west as hawaii and as far east as Maryland. CW ID of "DW", sends thirty upward 150 Hz sweeps (whoops), repeats 6 times then sends telemetry: BAT is in volts DC. oTMP is in degrees F with a calibrated outdoor thermistor, iTMP is in degrees F using a digital two wire sensor within the weather tight box, PV is in milliAmps to monitor solar panel performance

The antenna is a 1/2 wave dipole oriented North/South but .15 wavelength above the desert soil to create a more vertical but omni-like pattern. The 1:1 balun is home made and measured VSWR is close to 1.1 to 1 for 1 Watt of transmit power. 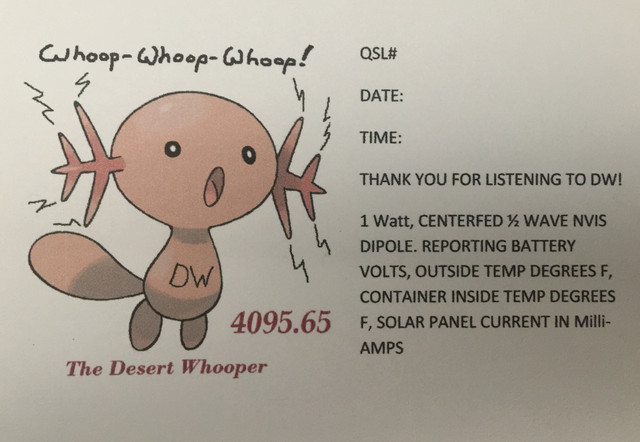