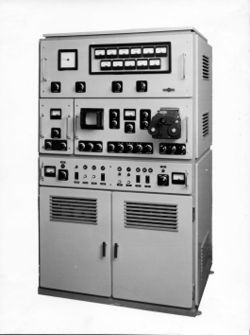 An ionosonde or ionospheric sounder (colloq. chirpsounder), is a specialized radar system for the examination of the ionosphere. An ionosonde is used for finding the optimum operation frequencies for broadcasts or two-way communications in the high frequency range.(1)

Ionospheric reflection of radio waves was discovered in 1924 by Edward Victor Appleton. The basic ionosonde technology was invented in 1925 by Gregory Breit and Merle A. Tuve (2) (3) and further developed in the late 1920s by a number of prominent physicists, including E. V. Appleton. The term ionosphere and, hence, the etymology of its derivatives, was proposed by Robert Watson-Watt.

The transmitter sweeps all or part of the HF frequency range, transmitting short pulses. These pulses are reflected at various layers of the ionosphere, at heights of 100–400 km, and their echos are received by the receiver and analyzed by the control system. The result is displayed in the form of an ionogram.

Modern ionosondes, like the popular Lowell DIGISONDE(TM), use low power transmitters but compensate by using specialized DSP techniques in the receiver. The result is a portable instrument, which can be easily relocated to interesting HF communications sites.

As the transmitted frequency increases, the radio wave is refracted less by the ionisation in the layer, and so it penetrates further before it is eventually reflected. As the wave approaches the reflection height, its group velocity approaches zero and this increases the time-of-flight of the signal. Eventually, a frequency is reached that enables the wave to penetrate the layer without being reflected. For ordinary mode waves, this occurs when the transmitted frequency (fo) just exceeds the peak plasma frequency of the layer. These frequencies are identified by the layer where reflection takes place (foE, foF1, foF2 and foEs). In the case of the extraordinary wave, the magnetic field of the earth enhances the reflection capability of the ionosphere and reflection occurs at a frequency (fx) that is higher than the ordinary wave by half the electron gyrofrequency.

All transmitted frequencies above this critical frequency will penetrate the layer without being reflected. Their group velocity, however, will be slowed by any ionisation, and this will add to the time-of-flight. If such a wave encounters another layer whose plasma frequency is higher than the frequency of the wave, it will be reflected, and the return signal will be further delayed as it travels back through the underlying ionisation. Therefore, HF frequencies between 5 and 30 MHz pass through the E layer and are reflected at the F layer. Similarly, MF frequencies (AM broadcast stations) at night pass through the D layer and are reflected by the E layer. When a sporadic E cloud passes over the ionosonde, then foEs becomes very high, often exceeding 25 MHz. This high reflection frequency allows medium distance ionospheric communications and TV DX reception in the low VHF range (28, 50 and even 70 MHz) with very strong signal stengths.

An ionogram is a display of the data produced by the ionosonde. It is a graph of the virtual height of the ionosphere plotted against frequency. Ionograms are often converted into electron density profiles. Data from ionograms may be used to measure changes in the Earth's ionosphere due to space weather events. 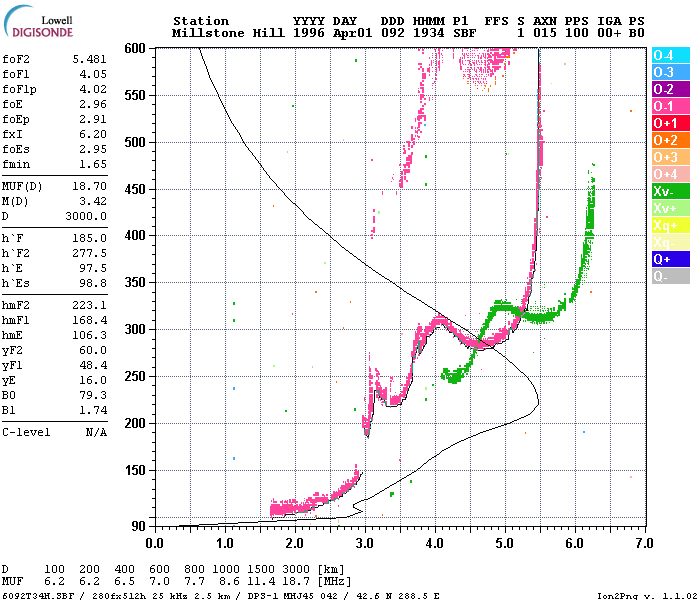 The maximum usable frequency (MUF) for radio waves transmitted at a low angle over the horizon is approximate 3 times the highest frequency returned to the ionosonde from radio waves transmitted directly upwards (to the zenith of the location). Therefore, in the sample ionogram shown above, fxI was measured as 6.2 MHz (green dataset), and the MUF for ionospheric reflection at the area of the ionosonde was calculated as 18.7 MHz for a hop distance of 3000 km. The pink dataset, which represents the ordinary wave, shows reflections at approximately 3 MHz (E-layer) and 5.5 MHz (F-layer).

This paragraph consists of Public domain material from the HAARP website

The HAARP Digisonde, which was developed and provided by the University of Massachusetts at Lowell, was one of the first instruments installed at the HAARP Research Station. The purposes of this instrument are to support frequency management of the 3600 kW Ionospheric Research Instrument transmitter and to provide real time ionospheric characteristics for guiding experiment selection. The Digisonde data are processed, archived, and are available for post-analysis of experiment results. Various formats of the information derived from the Digisonde are made available on the HAARP web site in chart form in near real time and can be accessed from the Data Index.

An example, annotated ionogram is shown in the figure to the left. Annotations in this figure are in blue lettering. (Click on the figure to see a full size image.)

This ionogram shows a well-formed F-Layer with a peak ionization at around 220 km. There is also a less obvious E-Layer at an altitude of about 110 km. The ionogram clearly shows how the transmitted digisonde signal splits into reflected ordinary and extraordinary waves. The ionogram chart and the parameter FoF2 in the list on the left side of the chart, show that the highest frequency that will be reflected from the ionosphere for vertical incidence (ie., for a radio wave traveling straight up from the ground) is 4.8 MHz.

The ionogram also shows what appear to be faint reflections from an altitude of 425 km. In reality, these chart points are the result of the sounder's radar signal being reflected by the ionosphere, returning to the ground where they are reflected back to the ionosphere for a second reflection before being detected by the Digisonde receiver. The time-of-flight is, therefore twice that of the normal reflection and the computed virtual height is twice the normal virtual height. This type of presentation is often seen under conditions of low ionospheric absorption.