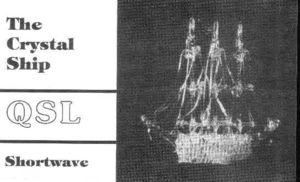 Since their second coming as an active pirate station in the Fall of 2004, The Crystal Ship has verified the reception reports of well over 100 pirate DXers in 32 states, reporting from all four corners of the lower-48 United States. Reception has also been reported from Canada, Venezuela, France, and England. The station claims to be based in lower Michigan.]

The Crystal Ship was busted by the FCC in May of 2011, according to FCC documents and by the admission of John Poet. Poet discussed at length his theory behind the bust on his blog, suggesting that another pirate operator was providing information to the FCC about the identity of pirate station operators. Poet further suggests that TCS may continue as a relayed station.