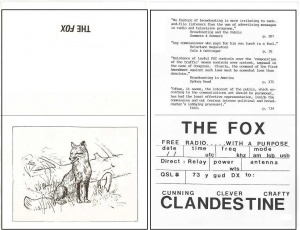 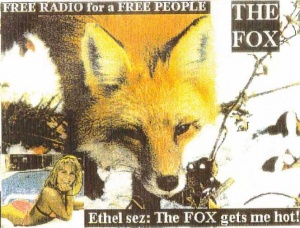 The FOX was a sharp-tongued, parody station in the middle 1990s. It operated on MW and SW frequencies. Reynard, the General Manager, carried on a running disparagement of a certain trollish maildrop operator.

Another relay program was the "Euro Show". Four new half-hour programs were recorded and broadcast by The Fox and several other relay stations variously over a single weekend. Relays were aired in both N. America and Europe. A unique multi-lingual ID in English and German was recorded over an "Apricot Brandy" (Rhinoceros, c. 1967) instrumental bed for this series of broadcasts.

The FOX was also intimately involved with production of the Voice of Helium production and broadcasts. The Helium "Christmas Show" and the "The Gasman Show" were parody productions of The FOX.

QSLs were often accompanied by copies of the FoxHole Times news sheet. Reynard has been mysteriously silent in recent years.