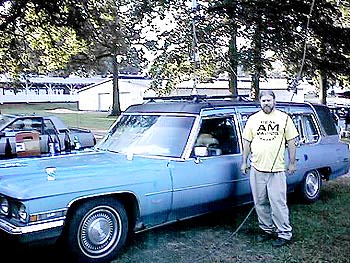 Timtron.
Timtron (also The Timtron and "Henry nYellar") are nicknames for Timothy M. Smith, WA1HLR. Tim is famous as a legendary AM radio enthusiast who is a fixture on 75 meter phone known for his vast knowledge of radio engineering. Timtron is seen here standing beside his beloved "Cadaverlac", a 1973 Cadillac hearse he acquired in "Throw-Upton", Kentucky. On most evenings, he can be heard operating his ham station on or near the AM window of 3885 KHz. He is closely associated with WBCQ, and assisted Allan H Weiner in the construction of the station. 'Da Tron is also is a beloved WBCQ on-air personality. His radio show, Radio Timtron Worldwide, has entertained and amused thousands of listeners since 1998 on 'BCQ.

In addition to his radio engineering knowledge, Tim is well known for his off color humor, a unique "Down East" accent, and colorful jargon.

The Timtron resides in a compound in Skowhegan, Maine with his beloved XYL, Marce. In May 1992 his home was tragically destroyed by a fire of unknown origin. For many years his primary transmitter facilities were relocated ro an old school bus, named the "Pus Bus" parked on his property. However he has subsequently rebuilt his residence and his well-equipped amateur radio shack are in more comfortable surroundings once again.

Timtron is a charter member of FARTS and the founder of TIT, the Timtron Institure of Technology. He is universally recognized as the discoverer of the Slimatron principle.

In addition to all his other activities, Timtron is a Founding Member of The NEAR-Fest and serves as the Director of On-Site Communications of that esteemed organization along with Mister Mike, W1RC, and the rest of the Deerfield crew.

The above not withstanding, Timtron is a brilliant radio engineer who possesses the rare genius and ability to repair just about any electronic device with the materials at hand. He is best known for his encyclopedic knowledge of both amateur and commercial broadcash transmitters.