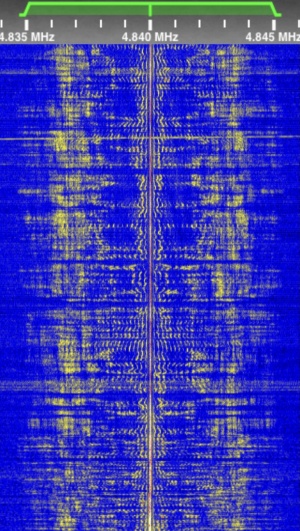 Amplitude Modulation
Amplitude modulation (AM) is one of the modes frequently used by pirates on HF and mediumwave. Often, pirates will use vintage amateur radio transmitters, such as those by E.F. Johnson (Valiant, Viking, Ranger), Globe and Heathkit. These transmitters are old, heavy and consume generous amounts of electricity, but are desirable because they can produce a relatively high fidelity, plate-modulated AM signal. At one time, these transmitters hardly had any value, but prices of vintage equipment have skyrocketed in the last decade. This may be one reason why AM is not quite as popular for pirate transmissions as it once was. Instead, many pirates prefer to use SSB. In addition, SSB is a more efficient mode. AM uses approximately 2/3 of its power on the carrier which contains no information but is needed to decode the signal. The remaining 1/3 of power is then used by two identical audio sidebands. SSB only transmits one audio sideband and the receiver generates the carrier, making it much more efficient. The downsides to SSB are that receivers are more complicated (and thus expensive) and most amateur transceivers limit the audio to have little bass and cut off high frequencies at 2.4 kHz. This audio filter is difficult to remove or disable and audio cannot be equalized to compensate for it. You must also be tuned to the exact frequency or the pitch will be wrong. AM transmitters are easy to make yourself and a homemade transmitter will have no audio cut off built in, allowing you to equalize the audio yourself before feeding it to the transmitter. Making an SSB transmitter yourself is nearly impossible.

AM mode is also known by its emission designation A3 or A3E.