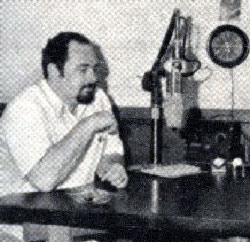 As a teenager growing up in New York City, Tommy operated an AM pirate station known as WISP. During a DX test in 1949, he received reception reports as far away as Ohio. Later he became the first, and only, journalist to visit Swan Island and Radio Americas, and his article about the journey appeared in the July, 1968 issue of Electronics Illustrated. According to Art, N2AH, Tom actually operated an amateur radio station from Swan Island as KS4CH. The article hit newsstands at almost exactly the same time Radio Americas left the air!

Kneitel was Editor of Popular Communications from its launch in 1982 until 1995, when he gave up day-to-day responsibilities for the magazine and became Senior Editor. He served as an advisor and resource to his successors until recently before his passing. In addition to innumerable articles in Popular Communications, he also published numerous radio and DX related articles in "Popular Electronics", "S9" and "CB Horizons". Occasionally he used the pen name "Alice Brannigan".

He also owned the small publishing house CRB Research Books, Inc, in Commack, NY, which published most of his books in the 1980s and 1990s.

Kneitel was inducted into the CQ Amateur Radio Hall of Fame in 2004.

Kneitel had authored a multitude of books on DXing, CB, scanning and other radio-related topics, most of them published by CRB Research Books, Inc, in Commack, NY. This is an incomplete list of his books:

Tom Kneitel run the WPE Monitor Registration Program of Popular Electronics during the late 1950s until 1961.(1)

Later, after the cancellation of the WPE registration service run by Hank Bennet(3), Kneitel launched a similar program through his company CRB Research as the Monitor Station Registry.(2) The CRB registration scheme also issued callsign-like identifiers, following the tradition of WR0, WPE and WDX schemes. Prefixes started with letter "K", followed by two letters indicating the State and a digit according to the amateur radio US prefix areas, so a DXer in New York would have an identifier starting with KNY2 while a DXer in California one starting with KCA6.