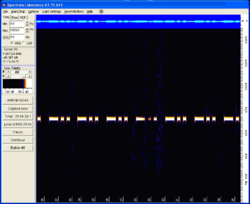 A Letter beacon (or single letter beacon) is a high frequency (HF) radio transmission of uncertain origin, which consists of only a single repeating Morse Code letter.

These transmissions sre often referred to as:

The letter beacon radio transmissions were discovered in the late 1960s but were known only to a few specialized DXers. Their presence became known to the wider amateur radio community in 1978, when beacon “W” started transmitting on 3584 kHz, in the 80 meters band. SPEEDX published indirect evidence that this particular transmitter was located in Cuba. (3)

In 1982 SPEEDX reported, supposedly on the basis of HF direction finding by the US military, that beacon “K” transmitting on 9043 kHz was located at 48° 30' N - 134° 58' E, near the city of Khabarovsk in the USSR. (4), (5) A few years later, W. Orr, W6SAI, suggested that the "K" beacons were actually located at Petropavlovsk on the Kamchatka Peninsula and the "U" beacons were located at the Barents Sea coast, between Murmansk and Amderma. (6)

According to Schimmel, in 1986 the FCC released the following HF direction finding results for single letter beacons, all of which indicate locations in the USSR: (5)

The link with the USSR and, more recently, Russia is further supported by the existence of single letter beacons transmitting letters existing only in the Cyrillic morse code alphabet, like the Ю beacon (22) which operated on 13627 and 13639 kHz in the early 1980s.

The ENIGMA group also accepted these locations for cluster beacons "C", "D", "P" and "S", adding Vladivostok for beacon "F". (7) A recent source (2006) regarding locations was published on the Web by Ary Boender.(8) (24) This publication also contains an extensive list of frequencies of letter beacons, both current and historical. The following locations are stated for cluster beacons:

For solitary beacons and markers, Boender suggests these locations:

Transmissions of the "P" beacon in December 2007, even on medium frequency (420 and 583 kHz) indicate the Russian Naval Base of Kaliningrad as a possible source. (9) Kaliningrad officially uses the ITU registered callsign RMP. The identity of "P" beacon as an alias for RMP was first discovered by Ary Boender in 1995, when it transmitted RTTY weather forecast for Baltic Sea using callsign RMP on 3262 kHz [1].

The single letter beacons are currently classified in two groups, the "Cluster beacons" and the "Channel markers". A beacon "P" exists in both groups. A third group, the FSK beacons, is now extinct. The following sections list the beacons currently (July 2010) active, according to published listeners’ reports.

The following callsigns and frequencies of cluster beacons have been reported recently in Numbers&Oddities newsletter, Utility DX Forum and ENIGMA-2000:

Occasionally some cluster beacons (especially "F" and "M") have been reported transmitting on frequencies different from their regular channel for short periods.

A second family of letter beacons includes those operating outside the clusters. For this reason they are often called "Solitary beacons" or "Solitaires". These beacons also transmit their single-letter identifier in standard CW (A1A) using Morse code.

A few solitary beacons, like "R" on 4325.9 and 5465.9 kHz, operate exactly like the cluster beacons, sending only their single letter identifier. (20)

The majority of solitary beacons, and most notably "P" on various MF and HF frequencies, most of the time transmit their single-letter identifier in morse code. However, occasionally the routine transmission is interrupted and brief messages are sent in fast Morse code or in an FSK digital mode. Therefore, the proper term for these beacon-like single-letter transmissions is "channel markers" (6) (15), as their purpose is to occupy and identify a particular HF transmission channel when no traffic is transmitted. There is no evidence that the cluster beacon "P" and the solitary beacon "P" are directly related.

It was reported in Numbers and Oddities, issue 142, that beacon C on 8000 kHz also transmitted messages under the regular callsign RIW, which is allocated to a Russian naval communications station in Khiva, Uzbekistan. (11)

There are also a few oddities, transmitting signals with poor modulation and irregular timing, like "V" on 5342 and 6430.7 kHz.

The following callsigns and frequencies of solitary beacons and markers have been reported recently in Numbers&Oddities newsletter, Utility DX Forum and ENIGMA-2000:

This group included the "K" and "U" beacons, which are no longer active. They transmitted their morse code single letter identification by shifting the frequency of the carrier by approximately 1000 Hz. This mode of "FSK-CW" has the ITU designation F1A. The use of FSK indicated that the transmitter was suitable for FSK data transmissions, like RTTY.(26)

Chris Midgley and Mike Gaufman of ENIGMA devised a naming scheme for all stations in their sphere of interest. In the original scheme, the following identifications were issued to letter beacons: (13)

ENIGMA-2000, the internet based ENIGMA successor group, revised the original ENIGMA designators. The current designations for letter beacons are the following (since 2007):(14)

The purpose and the applications of letter beacons are not yet known with certainty. Many theories and speculations have appeared in specialized bublications, but none is based on documentary evidence. They have been postulated to be radio propagation beacons, channel markers, used in tracking satellites, or used for civil defense purposes. (15) Some stations of this family, in particular the “U” beacon, have been implicated in deliberate jamming. (16)

QSL card from a USCG beacon with signle letter ID

A few aero navigation Non Directional Beacons (NDBs) and marine beacons also transmit single letter identification codes. They can be easily distinguished from Letter beacons as they transmit in the allocated low frequency and medium frequency bands, most of them are listed in appropriate aviation handbooks and their transmission mode is A2A (full carrier with audio modulation).

Some High Frequency Beacons also transmit a single letter as identification. On September 7, 2010 a beacon was heard on 9111.7 kHz at 1546 UTC. It sent a slow marker "A", which did not sound like a Russian beacon (MX). It sounded like somebody was playing with the key sending letters "A" and "M". Transmission lasted untill at least 1630 UTC. (19)