UHF replacement (or rather supplement) to the CB service. Created in the late 1990s by the FCC after intense lobbying by RadioShack.

Legal for use by individuals, families and businesses with the deregulation of Part 95 of the FCC rules in 2018. All 22 channels (2 watts on the 462 MHz channels and 0.5 watt on the 467 MHz channels) available for use without a license. Can business use FRS radios? Yes they can (and do!).

FRS is a license free two-way radio service regulated under Part 95 of the FCC rules - Personal Radio Services. FRS is widely used nationwide - 22 channels available, 15 of which are shared with the GMRS service. See also MURS. FRS is heavily used by private individuals, traveling groups for car-to-car communications, businesses, at construction sites and for various other purposes, including illegal activities and criminal enterprises. Since it is one of the most popular unlicensed personal radio services, FRS radios are found worldwide (even though they are only legal in the USA and are allowed in Canada, Mexico and other Latin American countries with some restrictions. Canada allows simplex-only use of all 22 FRS frequencies without a license requirement.

The easy accessibility to low cost FRS equipment, simple-to-use radios and short range mean that drug dealers have been confirmed to use FRS to communicate with lookouts, etc. in several cities in the USA. In urban areas it is often possible to hear several different groups using several of the FRS frequencies at once with a respectable listening setup or even with a handheld VHF/UHF scanner located in a good spot high up for improved line of sight coverage. In urban areas, street-level handheld FRS range is often only around 1 mile or even less in heavily built-up areas. In rural areas or in high-up locations the range can increase significantly to dozens of miles.

At legal power levels (2 watts for channels 1-7 and 15-22, 0.5 watts/500mw for channels 8-14) FRS radio range is highly dependent open location of transmitting and receiving radios as well as obstructions. From mountaintop to mountaintop very long range communications can be realized.

FRS is similar to the UHF CB service in Australia and New Zealand the PMR446 service in Europe and the UK as well as various other VHF/UHF personal radio services throughout the world. It is often what laymen think of when they think about walkie talkies.

In late 2017, the FCC changed the rules to accommodate the vast majority of "bubble pack pirates" operating higher power and/or operating on the 8 GMRS only frequencies. FRS now consists of 22 channels, 15 of which are shared with GMRS. Power limit is 2 watts on the 462 MHz channels, and 0.5 watts on the 467 MHz channels. The FRS rules were also modified to prohibit the sale of FRS/GMRS "combination" radios - effectively classifying all existing FRS/GMRS radios on the market as FRS radios only and removing the license requirement.

Transmission of data signals on the FRS channels is also now permitted under the updated Part 95 rules. 14 channel radios operating under the previous rules remain legal and the prohibition against removable antennas remains in effect. All transmissions must be made in narrowband FM - NBFM or NFM - 11K2F3E, 11K0F3E, 9K20F3E, 8K50F3E, 8K00F3E, 6K00F3E and other narrowband (11 kHz or less bandwidth) FM emissions voice are often found. Data transmissions must be in FSK mode and follow the narrowband requirement. Note that GMRS users are not required to use narrowband FM and many continue to use regular "wide" FM - 20K0F3E emission or 16K0F3E emission. However, older-style "combination" FRS/GMRS handheld radios operate narrowband FM only on the 462 MHz and 467 MHz frequencies.

FRS channel 1 462.5625 MHz with no CTCSS [carrier squelch or CSQ] is the unofficial FRS calling channel. FRS channel 20 462.675 MHz with 141.3Hz CTCSS is the GMRS calling channel, sometimes referred to as the "travel channel". Many FRS radios default to channel 1 with 67.0Hz CTCSS tone and it is common to find users using either 67.0Hz or CSQ unless they are in an area where heavy FRS use requires them to move to a different channel and/or CTCSS tone. 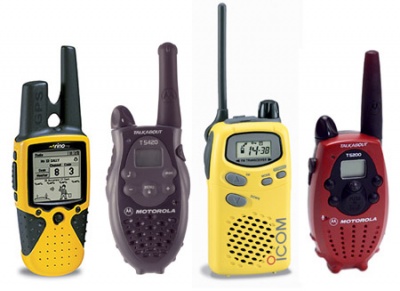