The other day, I picked up a very weak signal on the overnight SDR recording. At the end of the broadcast was an SSTV transmission, which I managed to decode as this: 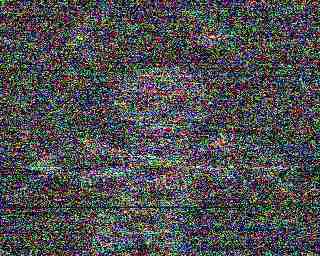 Sealord had also picked up the broadcast, and copied the SSTV as well, slightly better than what I had:

Neither of us managed to get an ID, the signal was simply too weak.

Another listener in Australia let the op of the station know about the logging thread on the HF Underground. I suspect the SSTV image helped a lot in identifying what we had heard. The op then joined the thread, and identified for us what we had heard, Radio Totse, from New Zealand.

Here is the actual image that was transmitted, by the way:

So while the received image was indeed quite poor, it was certainly sufficient to identify what station we were hearing. This let me to think about modes such as SSTV could be utilized by operators to help listeners identify what they are hearing.

The received image was so poor that the text in the image was completely obliterated. But the overall image was recognizable. This SSTV transmission was made using Scottie DX mode, which is one of the slower SSTV modes. By slower I mean that each pixel takes longer to send, making it more robust under poor signal conditions. Hence the DX part of the mode name. If Scottie DX mode is not used, it is probably important to choose another commonly used mode, such as Scottie 1, to make it more likely that listeners will be able to decode it. Often when conditions are poor, manual triggering and selection of the SSTV mode is required. There’s too many SSTV modes to go through them all, guessing. Also, slower modes should be favored whenever possible, to increase the signal to noise ratio of the received image. The fastest monochrome mode I am aware of is the Robot 36 second mode.

Another image mode that could be utilized would be FAX. Scottie DX takes about a second to send each scan line, whereas fax mode takes half a second. But Scottie DX is a color mode, so the red, green, and blue components of each pixel are sent separately. Each color scan line taking about a third of a second. A fax scan line takes slightly longer to send, which may help under poor conditions. On the other hand, the fact that each color component of a pixel in Scottie DX mode is send three times, with a third of a second delay between components, may provide a time diversity element that helps improve reception.

A third image mode is Hellschreiber. In this mode, text is sent as raw pixels rather than ASCII values. Each pixel is sent twice, for two lines of text, again providing some time diversity. It can perform fairly well under poor conditions, with the human brain acting as the “DSP” to decipher what is being received. Periodic identifications could be made in Hellscreiber mode, aiding in identification of the station.

Hellschreiber has a very characteristic sound, making it easy to identify:

There is of course also CW mode. CW is one of the most robust modes, cutting through the static when other modes fail. And it’s not necessary to use any additional equipment to decode CW, just what is between your ears. (In fact a major downside to CW is that most software decoders for morse code are actually quite poor, compared to the human brain. CW is simply a very difficult mode for software to decode) The downside, of course, is that you have to know morse code, something that many listeners don’t. There are several pirates already that do send short CW IDs, Blue Ocean Radio for example would often send “BOR” in CW, which was very recognizable, even to those of us who are not extremely proficient at CW. Shorter is probably better with CW IDs, sending an abbreviation of the station name when possible, to make it more likely that listeners without advanced CW skills will be able to decode it.

Finally another digital mode that could be used is PSK31. PSK31 is also quite robust, and the software decoders for it are generally both quite good and readily available. It’s a fairly fast mode, several characters per second typically, so station IDs along with contact information (email address, for example) could be periodically sent. For some time I have wondered if PSK31 could be transmitted continuously as part of the program audio, but at a reduced volume, so that it did not interfere with the programming, but was still strong enough for software to decode. It coul dbe treated as a sort of RDS for pirate radio, continuously transmitting text that included the station name, contact instructions, as well as information about the music being played, current programming, etc. Some experimentation would be required to see if this was indeed feasible, and what the optimum PSK31 frequency would be (it may not be the standard 1000 Hz).

Operators could use one or more of these modes to increase the probability that listeners will be able to identify what station they are listening to, and make it more likely that they will be able to contact the station. This provides benefits for the operator as well, since they will get more feedback about their broadcasts. Certainly a win-win for everyone.