The station was logged by quite a few listeners on the HF Underground Pirate Radio Message Board
The station opened with a PSK125 transmission:

RYRYRYRYRYRY I AM GLAD that my signal has reached such a far audience! I was not expecting such a turn out for te teS t _eP show. I couldn’t help myself, I have to go up again! I will be playing a new album, a favorite of many: TOMORROW’S HARVEST by BOARDS OF CANADA Thank you for listening, everybody. -UNID

The second transmission began with this CW (Morse Code) message:

And closed with an SSTV image: 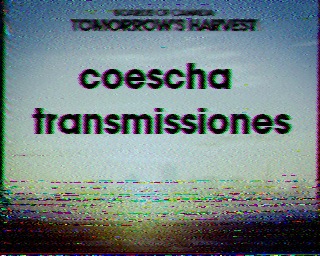 The station operator send me the following eQSL in response to my reception report, which was sent to bochfradio@gmail.com Here are recordings of the two transmissions from yesterday: